The HCN2 channel is responsible for the histamine-induced amelioration of motor deficits in PD rats. 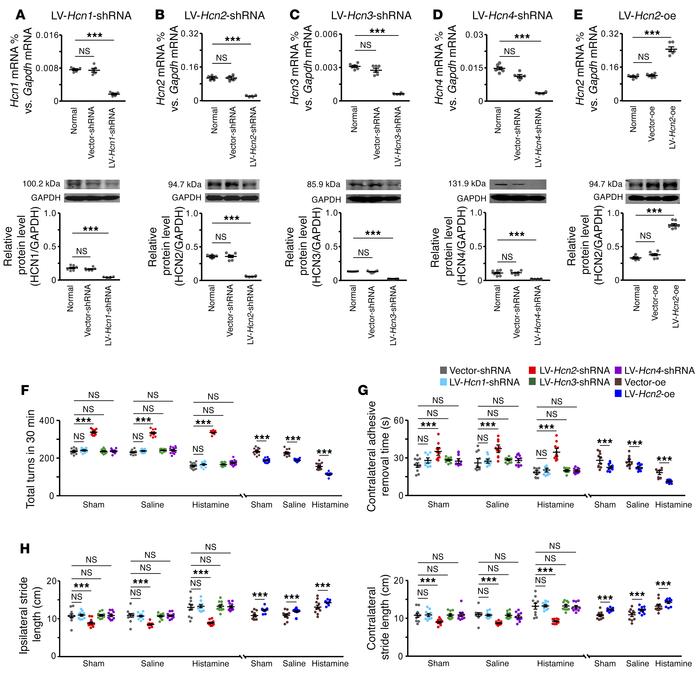 (–) LV--shRNA, LV--shRNA, LV--shRNA, and LV--shRNA effectively downregulated the expression of , , , and mRNAs and proteins ( = 6 from 6 independent experiments) in the STN. () LV--oe upregulated the expression of mRNAs and proteins ( = 6 from 6 independent experiments). (–) Effects of downregulation and overexpression of the HCN2 channel in the STN on motor deficits of turning behavior (, = 12), adhesive-removal test (, = 10), and locomotor footprints (, = 10) in PD rats with sham operation, saline injection, and histamine injection. Downregulation of the HCN2 channel significantly increased the apomorphine-induced turnings, prolonged contralesional adhesive-removal time, and shortened bilateral stride length, whereas downregulation of the HCN1, HCN3, or HCN4 channel had no effect on these motor deficits. Only the downregulation of HCN2 rather than the HCN1, HCN3, or HCN4 channel blocked the amelioration of turnings, removal time, and stride length of PD rats induced by microinjection of histamine into the STN. Overexpression of the HCN2 channel in STN not only decreased the turnings, reduced removal time, and enlarged bilateral stride length of PD rats, but also improved the histamine-induced amelioration in these motor behaviors. Data are represented as mean ± SEM. *** < 0.001, 1-way (–) or 2-way ANOVA (–) with Newman-Keuls post hoc test.