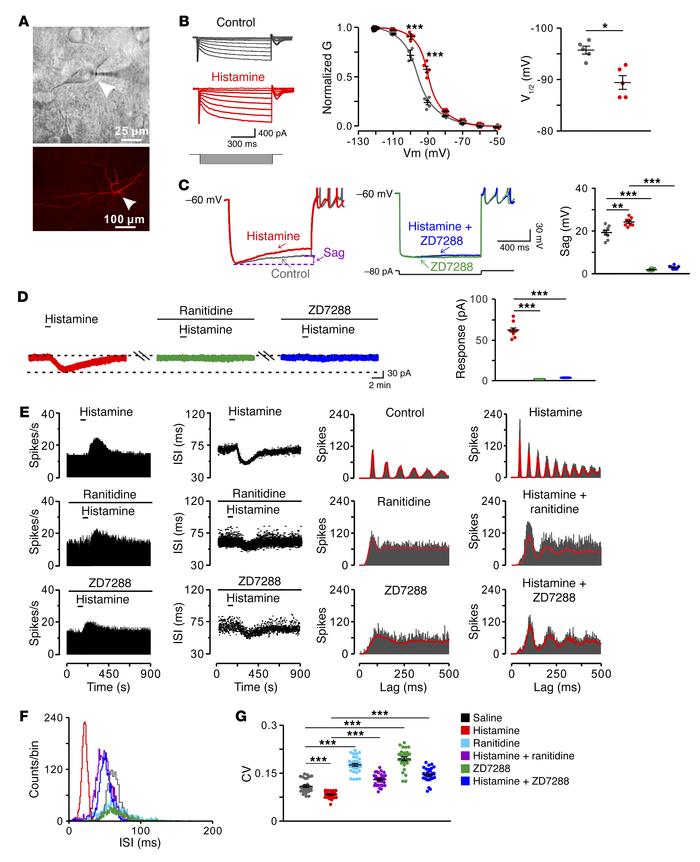 () Microscope image of a STN neuron (indicated by arrowheads) recorded in a brain slice and labeled with biocytin after patch-clamp recording. () Histamine (10 μM) shifted the conductance-voltage curve of recorded STN neurons (at –90 mV and –100 mV, = 5). The conductance curve was converted from the whole-cell currents recorded from –50 to –120 mV and was fitted by Boltzmann function. Note that the conductance exhibited a significant feature of hyperpolarization activation and histamine reduced the voltage required for half-maximal activation (, = 5). () Histamine increased the inward rectification (sag) in response to an 80 pA hyperpolarizing current pulse. ZD7288 (50 μM), a selective blocker for the HCN channel, abolished the depolarizing sag in both the absence and presence of histamine ( = 8). () Histamine elicited an inward current in a STN neuron, and ranitidine (1 μM), a selective antagonist for the H2 receptor, or ZD7288 (50 μM) totally blocked the current induced by histamine ( = 8). ( and ) PSTHs, scatter plots of ISI series, autocorrelation histograms, and an ISI histogram of discharges of a recorded STN neuron show the histamine-induced changes in firing rate and firing pattern in the absence and presence of ranitidine and ZD7288 (1 μM, respectively). () Group data show that histamine significantly decreased the CV of ISIs, whereas ZD7288 remarkably increased the CV and blocked the histamine-induced decrease in CV ( = 30). Data are represented as mean ± SEM. * < 0.05; ** < 0.01; *** < 0.001, 2-tailed paired test () or 1-way ANOVA with Newman-Keuls post hoc test (, , and ).