Schizophrenia is a severe disorder that disrupts the function of multiple brain systems, resulting in impaired social and occupational functioning. The etiology and pathogenesis of schizophrenia appear to involve the interplay of a potentially large number of genetic liabilities and adverse environmental events that disrupt brain developmental pathways. In this Review, we discuss a strategy for determining how particular common and core clinical features of the illness are associated with pathophysiology in certain circuits of the cerebral cortex. The identification of molecular alterations in these circuits is providing critical insights for the rational development of new therapeutic interventions.

David A. Lewis, Robert A. Sweet 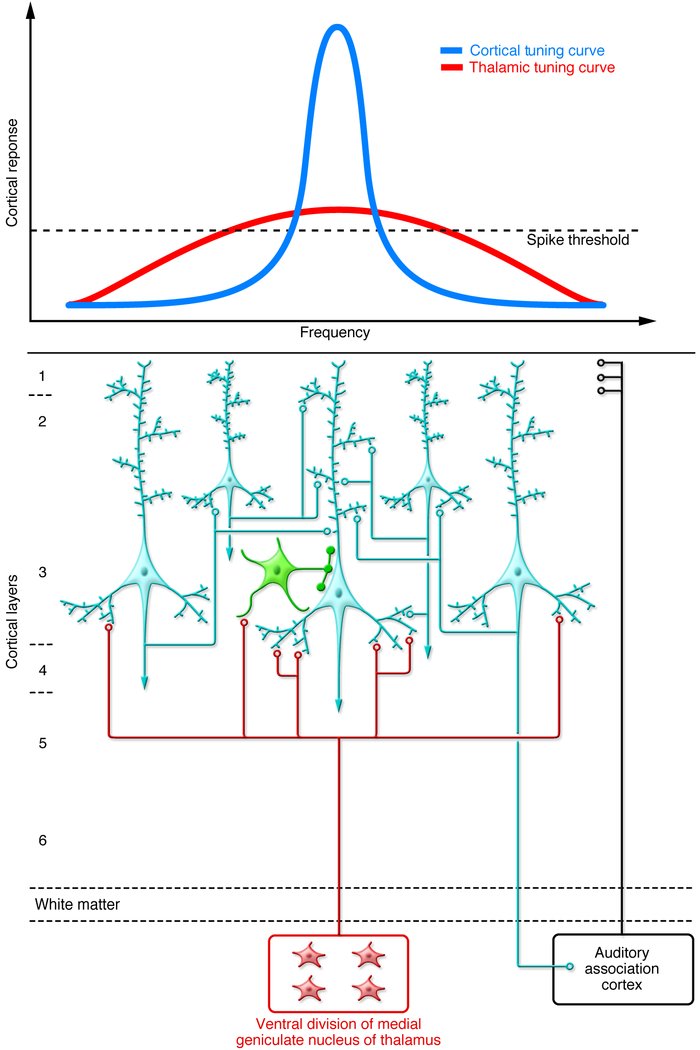 Auditory cortical processing is initiated by projections from the medial geniculate nucleus of the thalamus. These projections are arranged tonotopically (i.e., along a frequency gradient that is broadly tuned). The subsequent activation of a reciprocally connected isofrequency network of pyramidal cells (light blue) within layer 3 selectively amplifies a narrower preferred frequency, refining the thalamic tuning curve. Densities of dendritic spines and axonal boutons are reduced in deep layer 3 of subjects with schizophrenia, potentially limiting activation and current flow in the pyramidal cell network. Pyramidal neurons are co-tuned (i.e., they receive concurrent stimulation from thalamic or cortical projection neurons) with local inhibitory neurons (green), leading to a stereotyped excitatory-inhibitory sequence of postsynaptic potentials (), which increases the temporal precision of depolarization and enhances phasic activity of the pyramidal neuron network (). Thus, though alterations in GABA neurons in the AI (as described in DLPFC of subjects with schizophrenia; see Figure ) are currently understudied, if conserved across regions (), they may further contribute to impaired activation of isofrequency pyramidal neuron networks.