Schizophrenia is a severe disorder that disrupts the function of multiple brain systems, resulting in impaired social and occupational functioning. The etiology and pathogenesis of schizophrenia appear to involve the interplay of a potentially large number of genetic liabilities and adverse environmental events that disrupt brain developmental pathways. In this Review, we discuss a strategy for determining how particular common and core clinical features of the illness are associated with pathophysiology in certain circuits of the cerebral cortex. The identification of molecular alterations in these circuits is providing critical insights for the rational development of new therapeutic interventions.

David A. Lewis, Robert A. Sweet

Schematic summary of putative alterations in DLPFC circuitry in schizophrenia. 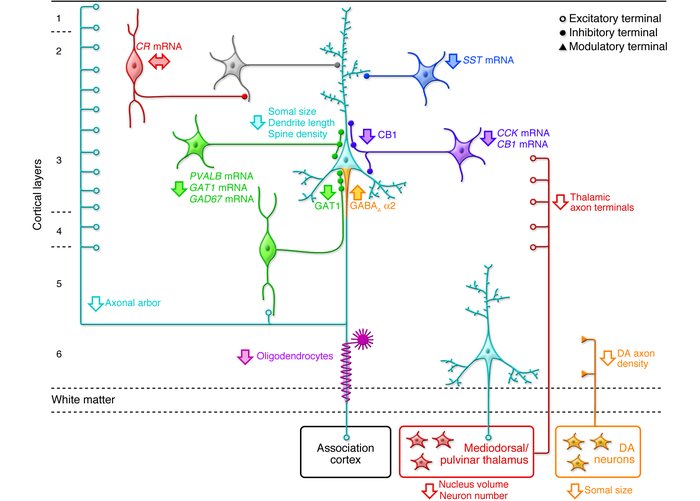 Pyramidal neurons (light blue) in deep layer 3 have smaller somal size, shorter basilar dendrites, lower dendritic spine density, and a reduced axonal arbor in schizophrenia. Altered GABA neurotransmission by PVALB-containing neurons (green) is indicated by expression deficits in several gene products as well as by lower levels of GAT1 protein in the terminals of chandelier neurons and upregulated GABAA receptor α2 subunits at their synaptic targets, the axon initial segments of pyramidal neurons. Expression of the neuropeptide somatostatin () is decreased in GABA neurons (dark blue) that target the distal dendrites of pyramidal neurons. Decreased cholecystokinin () and cannabinoid receptor 1 () mRNA levels and lower CB1 protein in axon terminals suggest altered regulation of GABA neurotransmission in a subset of basket neurons (purple) that target the cell body and proximal dendrites of pyramidal neurons. Gene expression does not seem to be altered in calretinin-containing (-containing) GABA neurons (red) that primarily target other GABA neurons (gray). Putative alterations in thalamic and DA cell bodies and their projections to the DLPFC are also shown. Some studies indicate that the number and/or gene expression in oligodendrocytes is also altered (). Not all of the circuitry alterations shown here have been sufficiently replicated or demonstrated to be specific to the disease process of schizophrenia to be considered established facts; filled arrows indicate abnormalities supported by convergent and/or replicated observations. Figure adapted with permission from ().