DNA: The Secret of Life

Find articles by Marks, A. in: JCI | PubMed | Google Scholar 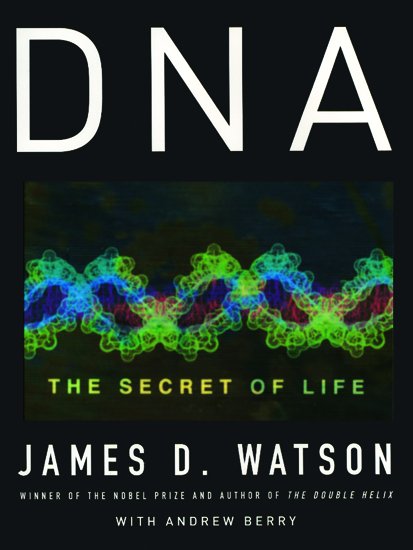 Curiously, the first chapter in James Watson’s new book about the discovery of the double helix is entitled “Beginnings of Genetics: From Mendel to Hitler.” While the focus on the Nazi atrocities makes for fascinating reading in a voyeuristic way, it seems to diminish the impact of the discovery of the structure of DNA. What is really of great interest are the stories of how the paradigm-changing discoveries in molecular biology were made late in the previous century. The abuses of the Nazi regime seem irrelevant to the societal challenges of the DNA era. That the holocaust was somehow a prelude to the “assault on . . . what is the chemical nature of the gene” is somewhat obscure.

Also curious is the emphasis on the use of PCR as the shining example of how “DNA technology” has influenced society. This emphasis was noted at the gala celebration of the 50th anniversary of the discovery of the double helix held earlier this year. At this event, the organizers produced an individual who had been erroneously incarcerated and is now free on the basis of “DNA evidence.” I recall thinking at the time that with all of the scientific advances that have been made since the discovery of the double helix, PCR-based forensic science is but a minor chapter. Yet this is what Watson himself chose to cite as the example of the fruits of his contributions.

Much more compelling are the now-historic tales about the giants of the dawn of the era of molecular biology. There are wonderful pictures and stories of the major players, such as the members of the “Rnatie Club,” each of whom was nicknamed after one of the 20 amino acids — Watson was “Pro,” Sidney Brenner “Val” — each with matching RNA ties. Those were the early “RNA days,” as Watson relates, when it was still thought by some that RNA might be more important than DNA — this before Francis Crick’s “central dogma” (DNA to RNA to protein) was elucidated and later proven.

I was hoping that Watson would more fully explicate the complex relationships among Rosalind Franklin, Maurice Wilkins, and Watson and Crick. After all, it was Franklin’s x-ray images of DNA that provided the first evidence for the double-helical structure of DNA. Watson acknowledges that he saw these images before he came up with his own model. I believe it was Einstein who once said, “Genius is hiding your sources well.” While that certainly was not the case for Einstein or Watson, a more revealing section dealing with Franklin’s role would have added to this book — historians want to know what her role was. As Franklin was a woman and a Jew living and working in the rarified air of King’s College in London, it is no surprise that her role would be diminished — it is disappointing that Watson did not seize the opportunity to delve into this part of the DNA story with the same attention paid to other sections of the book that are more tangential. Since Franklin died in 1958 of ovarian cancer, Watson argues that the Nobel committee would have had a hard time deciding whom to award the 1962 Nobel Prize in Physiology or Medicine that went to Crick, Wilkins, and Watson. This is because the Nobel committee never awards a single prize to more than three individuals.

What separates this book from others is that the father of the field wrote it. Watson recounts his and others’ roles in the complex societal debates leading to the Asilomar meeting in 1975, which resulted in recommendations that allowed the continuation of recombinant DNA research but required the use of non–disease-causing bacteria and extensive containment facilities. He explores the origins of the commercialization of DNA technology. The book addresses the controversies surrounding genetically altered agricultural products.

There is a great deal of attention paid to the human genome project. Watson’s recounting of how the human genome project was born is important reading for all of us. This effort is one of the great scientific achievements, and understanding how it came about is instructive for future large scientific enterprises. Chapters on the genome and the impact of genomic information on our understanding of evolution are well written and informative. The book finishes with chapters on gene discovery and gene therapy. Despite being the father of DNA, Watson is appropriately critical, noting, “Gene therapy may be a long way from delivering the miracles foreseen at the dawn of the genetic age.” It is comforting to read that one whose own interests so clearly lie in promoting DNA technology has not succumbed to the temptation to trumpet its success to the public in an irresponsible way that could generate new false hopes and more Jesse Gelsingers.

This book is an absolutely enjoyable read; it should be required for all biology students in high school and beyond and certainly for all medical students and graduate students. Those like myself who grew up as scientists during the molecular biology era will enjoy reading about the creativity and the challenges that were overcome during the birth of the science that we all use every day. Certainly, there is no one better suited to write this book, and with the help of Andrew Berry he has done a spectacular job.