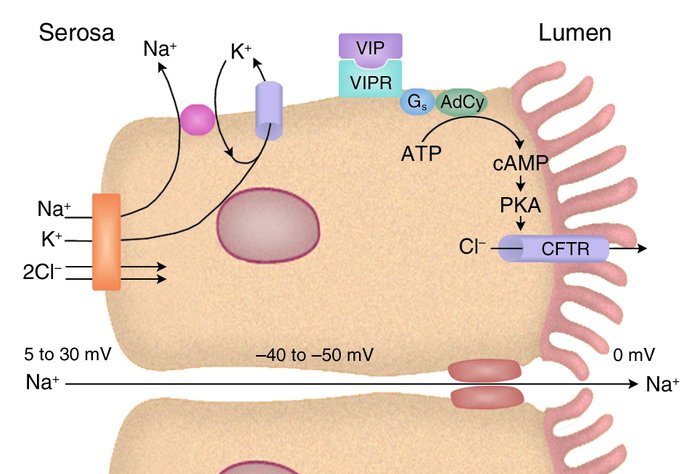 Intestinal Cl– secretion. CFTR, the apical anion channel, mutations in which cause cystic fibrosis, is opened by PKA-catalyzed phosphorylations (its activity can also be enhanced through protein kinase G– and PKC-induced phosphorylations). The VIPR receptor is a G protein–linked activator of adenylyl cyclase (AdCy). The electroneutral NaK2Cl cotransporter facilitates the coupled movement of these ions across the basolateral membrane. The drop in cell [Cl–] that follows opening of the apical anion channel enables an inward flux of the three ions. Cotransporter activity also increases in response to cell shrinkage. When CFTR is opened, the resulting anion efflux depolarizes the cell’s electric potential. The repolarization required to maintain secretion is accomplished through the opening of a cAMP-sensitive, Ca2+-insensitive K+ channel in the basolateral membrane. During secretion, the cell electric potential is 40–50 mV negative and the serosal potential is 5–30 mV positive, both relative to the lumen (the serosal potential tends to be closer to 5 mV in the small intestine and 30 mV in the distal colon). The transmural potential difference drives Na+ movement into the lumen through the tight junctions via the lateral intercellular spaces.